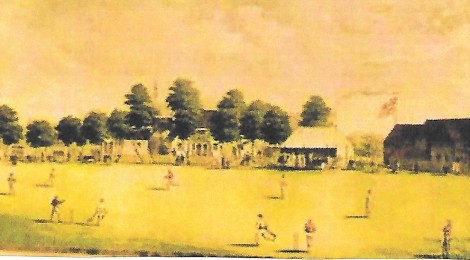 On Easter Monday 1843, at ten o’clock in the morning, as fine holiday weather brought thousands out to the fairs at Stepney and Greenwich and to view the newly opened Thames Tunnel at Rotherhithe, a game of cricket began on the grounds adjoining the Spotted Dog inn. The teams – The City and The West End – were Yorkshire men who had come to live and work in London. It was a ‘friendly’ match other than that the losers would be footing the bill for dinner in the Spotted Dog afterwards.

It was a “most excellent dinner… comprising every delicacy of the season”. Wine circulated, “conviviality and good feeling prevailed”. There were “appropriate songs from several members of the company” and all there were “gratified with the day’s amusement”. Enough, evidently, to return the following two years.

As far as we know these marked the first sporting events on the ground (pictured above in a print produced some years later) where today Clapton FC play their home games. Regular cricket fixtures occurred in the years following, the first football being played in 1881. In this way the Spotted Dog ground has a credible claim to be the football venue with the longest continuous sporting use in England.

As modernity – manufacturing, transport, housing for workers – engulfed and transformed the surrounding area, the tradition of local oral history endured. A writer visiting the Spotted Dog in 1920 records “a chat with a very old inhabitant, who cherished the story handed down to him by his sires…(that a) huge barn-like structure…anciently enclosed the kennels for a pack of royal hounds”. Certainly this would have been convenient for hunting parties into then nearby Epping Forest and the structure (which survived until shortly before World War One) can be seen on the extreme right of the featured picture.

Certainly too, for all the differences between an Essex parish of the early Victorian age and our fast changing built-up London Borough of today, the picture we get from a century and a half ago – of outsiders mixing with locals, workers with professionals, of sport followers converging on the ground, of eating, drinking and singing – still resonates with contemporary memories of the Old Spotted Dog.

This is an extract from a longer piece compiled by our archive researcher, Chris Tymkow, which we hope to publish as the first instalment in a series of history leaflets as part of our commitment to raising popular awareness of the Dog’s historical legacy which belongs to us all.