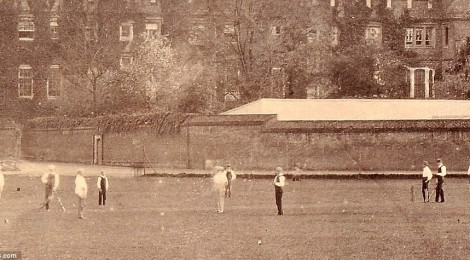 The Old Spotted Dog and the game of cricket went hand-in-hand for much of the nineteenth century. An early edition of the Stratford Times, a local newspaper of the mid-Victorian period, gave notice of a supper to be held in the Inn by the Upton Phoenix Cricket Club on the evening of Thursday, 30 January 1859.

This supper (starting at 7pm) would have given club members a chance to talk cricket during the sport’s closed season. Tickets could be had from the Spotted Dog’s proprietor, William Vause, and were priced at two shillings each. To put that in context, an advert from that year for a ‘General Servant’ to work in nearby Ham Park (now the City of London West Ham Park but then a privately owned estate) offered an annual wage of seven pounds. So we can suppose that the cricketers of Upton were, by and large, comfortably off.

But they got more than just supper for their two shillings: “Several musical friends have kindly promised to be present … and the committee confidently anticipate a numerous company and a pleasant evening.”

We have found no report of how the supper went, but we catch up with the Club again in July 1859 when they were at home to Brentwood, on the ground adjoining the Old Spotted Dog. This ground has since become famous as the home of Clapton Football Club, but was then one of several local fields (Ham Park – also known at the time as ‘Upton Park’- was just one) that hosted cricket matches.

The top scorer that day for Upton Phoenix, hitting 44 runs, was Horace Alexander, a star of the local sporting scene, and dubbed “Alexander the Great” by one newspaper report. He would later be involved in the formation of Upton Park Football Club, which also had strong ties with the Old Spotted Dog Inn.

Another player in that side was George Banes, who lived for some years in the Red House on Upton Avenue (almost opposite the Old Spotted Dog) who later became the local Conservative MP – those being days, of course, before the formation of the Labour Party.

[The image is of Eton, circa 1860, borrowed with the unknowing generosity of the Daily Mail]